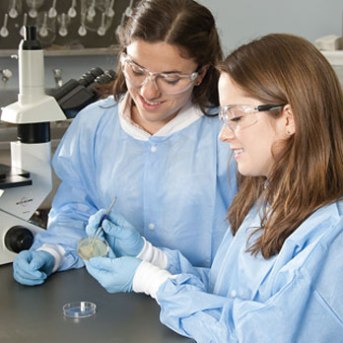 For centuries, scientists have used model organisms from the three domains of life, bacteria, archaea, and eukaryotes, to understand biological functions. For example, the bacterium Escherichia coli (E. coli), which has been studied for more than 60 years, has provided important findings in the areas of biological engineering and industrial microbiology. On the other hand, eukaryotic domain organisms like the fly Drosophila melanogaster (D. melanogaster) and the roundworm Caenorhabditis elegans (C. elegans) have been widely used to study genetics and developmental biology. C. elegans was first established as a model organism in 1963 when Sydney Brenner proposed using the simple worms for studies on neuron development. For his work Dr. Brenner was awarded the 2002 Nobel Prize in Physiology or Medicine. Many research labs around the word have continued to work with C. elegans on numerous biological questions, including disease and learning.

How is it possible that a tiny worm can make so many giant contributions to science? It turns out that C. elegans have a number of huge advantages in the lab:

Now that you know the convenience of working with C.elegans, why you don’t try experimenting with the worms in your own classroom? We think they’ll really inspire your students to explore the science and techniques behind model organisms.

Interested in learning more about using worms in your classroom? Be sure to watch our series of Instructional Videos before performing the experiment. We also have a convenient troubleshooting guide to make your experience as simple as possible.